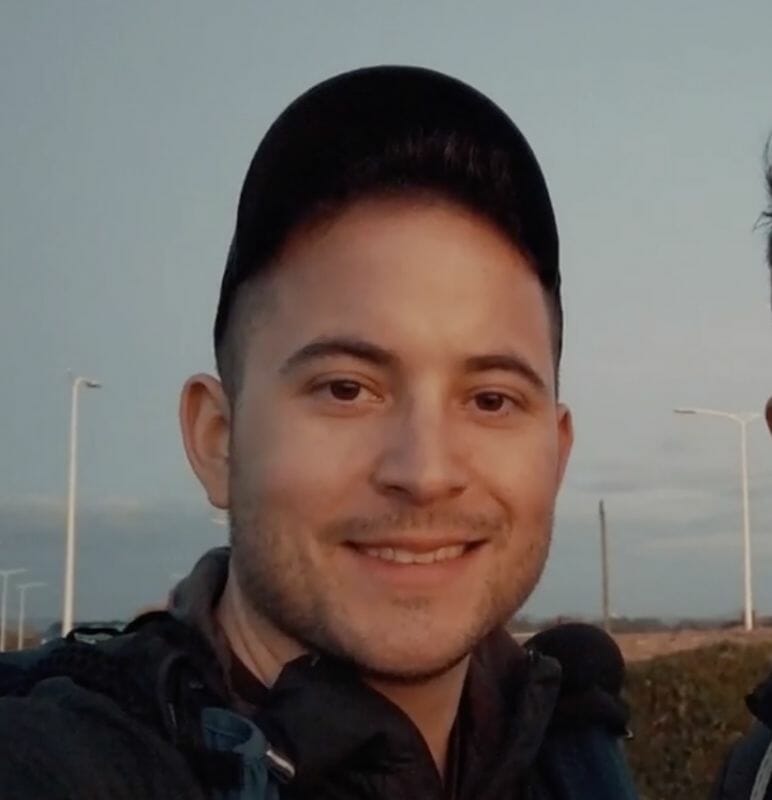 Co-founder Joel Rendall was born and raised in Ontario, Canada. As part of a jazz trio, he spent many years performing on cruise ships, until 2012 when he settled down in Lisbon and began his own journey as a European Portuguese language learner. Combining this first-hand experience with his background in web design, he quickly found a passion for making the language accessible to learners worldwide.

Years after walking the Caminho de Santiago in our first “Passo a Passo” film, your favourite Portuguese / Canadian pilgrims are back at it again, this time to walk the beautiful Rota Vicentina! To spare you from the foot blisters, Rui and Joel do the hard work for you, trekking through challenging sand dunes all […]

We recently had the pleasure of participating in the online liveshow, “Pandilha”, where we discussed how Practice Portuguese got started. You can watch the full interview (with English subtitles available). We’d love to have you learn European Portuguese with us, so remember to visit our website to learn more! Thanks to the wonderful hosts Mónica […]

Earlier this year, we appeared on SIC Mulher’s “What’s Up TV” to discuss running online entrepreneurship. We also gave an overview of Practice Portuguese’s learning resources, and how they help Portuguese learners around the world. Just like everyone else, we had to wait for it to air before seeing the final result. To let you […]

Can football (soccer) players eat Pastéis de Nata every day❓🤔 In this video we are going to practice European Portuguese together while we talk to a personal trainer (and good friend) Rafael Cabrita. He shares some of his fitness and nutrition secrets, despite Rui and Joel’s best efforts to derail him with their silliest questions. […]

Rui and Joel appeared on “What’s Up” with Carolina Patrocínio on March 16, 2021, to discuss how Practice Portuguese came to be, and where we’re headed! (Do we look as nervous as we felt?) Thanks to SIC Mulher for inviting us and for making us feel so “bem-vindos”!

Rui loses his mind and Joel loses his hearing as they count down to 10,000 followers on Instagram. Obrigado pelo vosso apoio! Don’t forget to join (and follow) us on Instagram for tons of exclusive European Portuguese content!

👋 Adeus looks similar to adiós, so you can pronounce them the same way, right? (Spoiler alert: NO) We’ll cover the simplest ways to say goodbye in Portuguese, including a more informal option. Stay tuned until the end for bonus tips on riding that “urgency wave” when you arrive in Portugal! 🌊

2021 has already been off to a busy start! Rui & Joel update you on everything that’s going on, (all in Portuguese): • Rui & Joel get COVID swabs jammed up their noses… for TV • Rui quits something and joins something else within the same week (Huh?) • Our mobile app is on the […]

(Video version available on our website and YT/FB/IGTV) 2021 has already been off to a busy start! Rui & Joel update you on everything that’s going on, (all in Portuguese): • Rui & Joel get COVID swabs jammed up their noses… for TV • Rui quits something and joins something else within the same week […]

Portuguese people LOVE to use diminutives, such as adding -inho to make words cuter. But BE CAREFUL because there are a couple exceptions that can get you into big trouble!

Is the pronunciation of “sim” (yes) the same as “si” in Spanish? How do you pronounce that “m” at the end of the word? You’ll also learn how to pronounce the nasal sound in “não”, and how to avoid wasting time when time studying Portuguese!

There’s a pretty good chance that, unless you’re already speaking with a perfect Portuguese accent, you’ll be asked where you’re from. This episode will make sure you’re armed and ready with the right answer so you can keep the conversation flowing!

In this episode, Rui and Joel show you how to introduce yourself to someone and ask them what their name is.

Rui and Joel show you how to ask how someone is doing, and how to correctly say “thank you”, (something that even natives sometimes get wrong!)

Mastering the consonant sounds are essential to understanding and speaking European Portuguese. While many sounds are similar in English, there are a handful that are extra challenging to learn and pronounce, including “s”, “r”, “lh”, “x” and “z”. Check out the complete reference guide with audio examples here! Chapters: 00:00 Intro          […]

(NEW: Video and audio-only versions available) Have you been to the dentist lately? In this first-ever video podcast, we feature one of our latest Shorties and discuss useful vocabulary all about… teeth! While recording, we’re interrupted by some personal text messages that we reveal and deconstruct for your learning pleasure!

We all have moments where we need some colourful language to express ourselves. (No, we’re not talking about swear words, that’s for another episode). Today we go through the whole colour spectrum while featuring the Shorty, “Um Lindo Bebé“. Do you know how to say your favourite colour in Portuguese?

In this episode, we once again analyze record audio clips from our brave listeners! We listen to the Shorty, “À Busca de Doces“, and explore how to make your Portuguese sound more native with pronunciation subtleties and word choice. We also clarify some other challenging concepts, such as the differences between “aí, ali, & lá”.