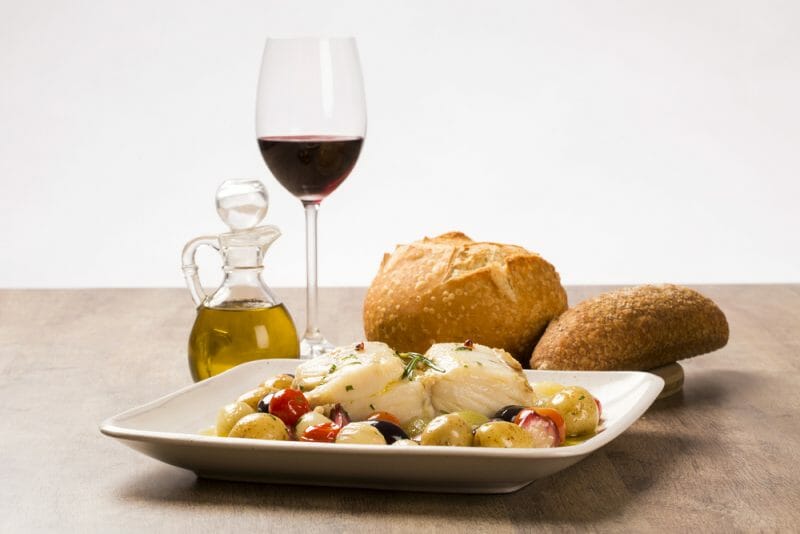 Who doesn't love talking about food? In these episodes you'll learn lots of vocabulary related to eating, cooking, and grocery shopping, plus discover many popular Portuguese foods and dishes.

Learn Portuguese while cooking a delicious meal with this recipe for Beira-Alta Style Carolos.

A group of friends are about to go see a movie. Before they leave, Diana decides to make dinner for everyone, despite not being a very good cook… Take note of how regular -ar verbs (such as chegar, começar, cozinhar, ajudar, cortar, etc.) are conjugated in the present tense (presente do indicativo) throughout the dialogue. […]

Have you tried a pastel de nata?

Senhor Esteves stops by to say hello to Dona Graça and her daughter, Carla. Since it’s almost lunchtime, they invite him to stay for a meal. Notice the different levels of formality used among the different speakers.

Before leaving Canada, Joel and Rui spend the afternoon indulging in the strangest local craft beer flavours they could find. Should Portugal take notes and adopt some of these new flavours… or is it better to stick to the basics?

Luísa stops at the bakery to buy some bread and chat with Sr. Ramiro, an old family friend who seems to have had every profession imaginable! Notes for this episode: Notice how Luísa treats Sr. Ramiro with the formal form of “you” and he treats Luísa with the informal form (tu). Learn more about informal […]

Let’s practice forming plurals in European Portuguese with this conversation between Maria and Pedro. Maria is looking for a pen, but ends up chatting with Pedro and sharing some snacks with him.

In today’s European Portuguese Listening Practice, you’ll listen to a dialogue between a Portuguese couple, who cannot agree on what time to get up in the morning. Martim is already hungry and bored, so Lara has to get creative if she wants to sleep in.

In today’s European Portuguese Listening Practice episode, you’ll listen to a dialogue between Maria and her friend. Maria has an unusual craving for sweets, so she decides to try and create her own candy.

Can football (soccer) players eat Pastéis de Nata every day❓🤔 In this video we are going to practice European Portuguese together while we talk to a personal trainer (and good friend) Rafael Cabrita. He shares some of his fitness and nutrition secrets, despite Rui and Joel’s best efforts to derail him with their silliest questions. […]

Have you ever wanted to grow your own vegetables? You can even plant a little garden indoors!

In this video, you’ll learn how to order a coffee in Portugal, a task more complex than it seems! There are several types available and the lingo can vary from city to city. Don’t miss out on Portugal’s coffee culture, an essential part of daily life!

Learn about Serra da Estrela, the highest mountain range in mainland Portugal. Correction on Line 5: We recorded this as “1933 metros”, but the actual elevation is “1993 metros”.

Follow along with this simple vegetarian recipe using some delicious Portuguese ingredients. The formal imperative mood is used throughout.

Diogo is in a bad mood and just wants some breakfast. Unfortunately, everywhere he goes seems to be closed. Listen for regular -ir verbs in the present tense throughout the story, including abrir, desistir, vestir, and decidir. Remember, they’re conjugated with almost the same endings as regular -er verbs!

Learn about Pico, one of the beautiful islands of the Azores and home to the highest peak in Portugal.

Practice the imperative mood as Carlos tries to keep up with Sara’s cooking instructions!

A mother and son make a shopping list for their family New Year’s celebration.

A customer asks a grocery store employee for help finding the right kind of flour.

Listening Practice! Dona Rosa discusses her experiences selling crops at the farmer market, known to locals as the Reforma Agrária. This name is based on the Agrarian Reform which came about in Portugal following the 1974 Carnation Revolution. Through this reform, the government set up collective farms in the Alentejo region and gave subsidies to […]

João asks his grandmother to teach him how she makes her delicious oatmeal.

Teresa and her son Adriano enjoy their usual Sunday lunch together.