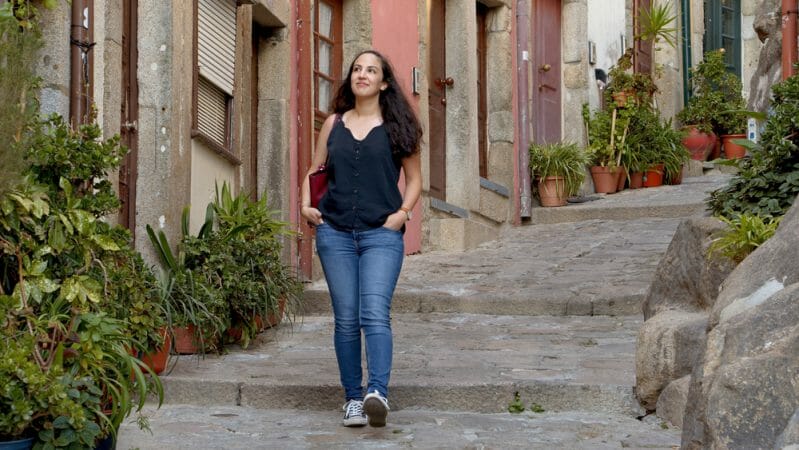 Violeta sets up an appointment to see a 2-bedroom home for rent.

A man calls SEF to get more information about the process of obtaining permanent residency in Portugal.

Follow along as Abel signs up for a new cell phone and internet plan.

Learn the basics of how crime and security are managed in Portugal, one of the most peaceful countries in the world.

Gaspar views a 4-bedroom flat that is for sale in his favourite neighbourhood. He is pleasantly surprised by everything it has to offer.

Abel goes to the post office to send a letter to someone in Lisbon. Will he choose regular mail or blue mail?

The process for becoming a resident of Portugal varies depending on which country you are moving from. We’ll provide an overview for both EU Citizens and Non-EU Citizens. In both cases, make sure to read through the SEF or Serviço de Estrangeiros e Fronteiras

Play slow audio Play normal audio Foreigners and Borders Service website to get the most up to date and detailed information about the requirements for your particular circumstances.

When you’re ready to apply for your autorização de residência

Play slow audio Play normal audio Permanent Residence Certificate (both EU and non-EU), be sure to make your SEF appointment well in advance as the appointments fill up quickly.

You will need a Número de Identificação Fiscal

Play slow audio Play normal audio Taxpayer number, which is a Portuguese tax number required for things like buying a home, opening a bank account, receiving benefits, paying taxes, and more. You can apply for this at a Finanças

Follow along as Carolina goes through the process of renewing her Cartão de Cidadão (Citizen Card).

Manuel is a 20-year-old man who studies medicine in Porto. Learn more about his family and how he spends his time.

Portuguese bureaucracy can be very complicated, but applying for a NIF is at least a relatively gentle introduction. If you are going to live and/or work in Portugal, this number will chase you around, as you’ll need it for any kind of contract (opening a bank account, buying or renting a house, setting up utilities, Internet, employment, etc.), so getting one should be very high on your to-do list.

What is a NIF number?

Play slow audio Play normal audio Taxpayer Number. It is a 9-digit unique personal identifier used for tax purposes. This tax number is necessary for both individual and collective persons/companies, but for companies it is actually called Número de Identificação de Pessoa Coletiva

Apart from its identification purposes, the NIF is also a way of fighting tax evasion and fraud. It has become very common for businesses to ask customers if they want to include their NIF on receipts because it results in deductions on their tax returns and may even grant them big prizes, as receipt numbers are drawn every month in a national fiscal lottery.

Play slow audio Play normal audio Would you like your tax number on the receipt?

Who can ask for a NIF and where do you get it?

The NIF can be requested by anyone at any time, whether or not you’re a national or even a resident. However, if you’re a non-resident and non-EU/EEA citizen, you will need to

Joaquim is a man from Viseu who lives in a small house in the centre of Lisbon. Get to know more about Joaquim and the place he calls home!

In recent years, more and more foreigners have been looking into buying a home in Portugal. Housing prices dropped significantly after an economic downturn, but as the economy recovers, property prices are beginning to rise again, especially in certain areas. Still, interest rates remain low and many are drawn to the climate, quality of life, relatively low cost of living, rich culture, and peaceful atmosphere of Portugal. We’ve put together this guide to help you navigate the home-buying process in Portugal.

Welcome to Portugal! With its interesting history, lovely climate, and amazing blend of cultures, it’s no wonder that more and more foreigners are deciding to settle down here. Get lost in this country of smiles and breathtaking landscapes!

Monica has just moved to an apartment in the Historic Center of Porto. She meets her neighbour Eduardo who tries to impose some unexpected rules. Will she be able to deal with these strict requirements?

In this episode, we explore the Portuguese apartment rental market with James, a young adult of Portuguese descent looking for a new place. To find some leads, he recruits the help of his friend, Luís. However, Luís happens to be going through a bit of drama with his ex-girlfriend, so let’s see if he’s able to be of any help…

If you plan to comprar

Play slow audio Play normal audio to rent (property) a home in Portugal, here are some of the main types of housing you have to choose from:

Play slow audio Play normal audio My family has a farm on the countryside.

Now that you’ve described the type of home, let’s take a look inside:

In what might possibly be our most ambitious Diálogo to date, we explore some of the delightful bureaucracy that surrounds obtaining a residency permit in Portugal. With Michael (our special guest estrangeiro) moving to Algarve, we get a chance to explore some of the vocabulary and pronunciation quirks that set this region apart from the rest of Portugal!

A special “obrigado” to our friends who helped us put this episode together:

• Michael Reeve – provided his guidance, ideas and voice talent (from afpop.com, an organization that provides support to foreign residents and visitors throughout Portugal)
• Rui Coimbra Sénior – O pai do Rui!
• Eliana Silva – talented voice actress who not only brought the female characters of Algarve to life, but also helped us make sure the script was as authentic as possible

You’ll definitely find some of this Algarvian dialect challenging, but we’ll go over a lot of this episode’s content in a discussion between Eliana, Rui & Joel, to be released soon!

Note: This episode’s mention of afpop is not a paid endorsement, but just a friendly collaboration!

Update August 1, 2017: As promised, we posted a follow-up episode to explore this dialogue in more detail. Once you’re done listening to this episode, make sure to have a listen to our follow-up discussion!