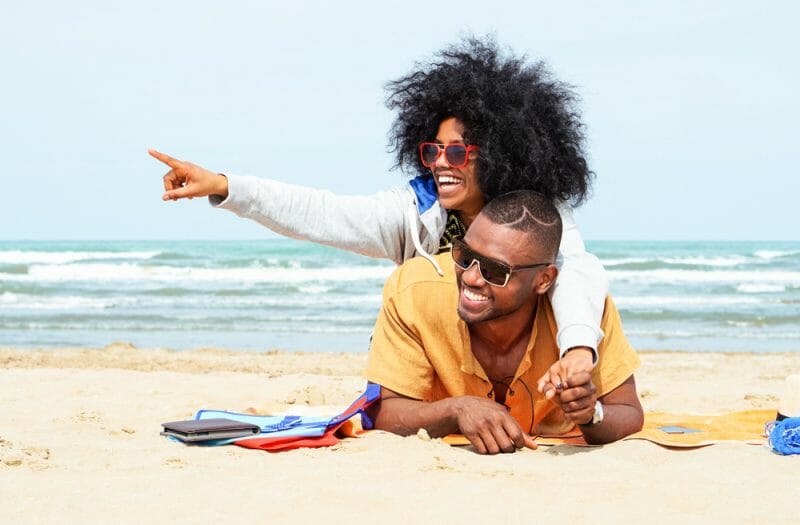 Telma and Filipe practice their Portuguese skills at the dinner table.

Luísa can’t decide which dress to wear to a party, so she asks her husband for his opinion.

In this lesson, we’ll review a topic we’ve covered before, which is Portuguese demonstratives – este, esta, esse, essa, aquele, and aquela – as well as their plural forms. In Portuguese, demonstrative determiners indicate where something is in relation to to the speaker and listener in terms of place or time, and must agree in gender and number with the noun they define.

Este (masculine) and esta (feminine) are the singular form equivalents of “this” in English. These determiners are used to refer to specific things or persons that are close to the speaker. Examples:

Dona Ana is always trying to help out Fernando and Sara with their baby Bruno… although sometimes that help comes in the form of a lecture!

As previously mentioned, the preposition a

Play slow audio Play normal audio to, at can be combined with the articles o, a, os, and as to become ao, à, aos, and às.

As far as demonstratives are concerned, a can only form contractions with aquele(s), aquela(s), and aquilo.

Play slow audio Play normal audio in can be combined with variable and invariable demonstratives to form a number of very useful contractions.

Remember that all the same rules for demonstratives remain valid when they appear in the following contractions.

These contractions can be used to indicate positions, movement or time, to identify something more clearly, and

You learned in The Preposition “De” (from the first Prepositions unit) that de has several different meanings and can be joined together (contracted) with:

Another very common combination is with demonstratives. Let’s look at the contractions formed by combining de

As you can see, they are all formed by simply adding a “d” to the beginning of the demonstrative. These contractions can express possession, origin, direction, and more. Here are some examples:

In the previous lessons of this unit, you learned about variable demonstratives, which change depending on the gender and number of the objects(s) they describe.

Here’s some good news for you: invariable demonstrative pronouns are much easier to learn, because as you can see below, there are only 3 of them. You still have to consider the position of the object(s), but not the number or gender.

Even though these pronouns also translate to this and that in English, their meaning and usage is slightly different.

You can think of these invariable pronouns as being more impersonal than their variable counterparts.

How Do You Know When to Use Invariable vs. Variable?

Although we’re usually told to avoid thinking in English, here’s a trick:

As you’ll recall, variable demonstratives have to agree not only in gender and location, but also in number.

For every variable demonstrative covered in the previous lesson (which were all singular), there is also a plural counterpart.

It might sound scary, but you’re in luck: all you have to do is take the singular form and add an “s“!

As you can see, this is to these as este/esta is to estes/estas, and so on. Once you master the singular demonstratives from the last lesson, you can easily come up with its plural, and all the same rules about gender and location apply. Let’s look at a few examples…

Variable demonstratives are used to indicate all of the following at once:

The “demonstrative” part of this fancy name refers to the last point above, the item’s position. We must choose which demonstrative to use, according to which one of the following fits best:

As you may have realized, this doesn’t happen in English. You just have to choose between this and that. That’s it! In English, the position of the object relative to the speaker is the only thing that counts. In Portuguese, we have to choose which “that” to use according to where the object is in relation to the listener.

This lesson will cover singular variable demonstratives, all of which you can see below:

Play slow audio Play normal audio Demonstratives identify a particular person or object and establish its location in relation to the speaker, the listener, or simply within the general context. They can tell us, for example, whether something is close or distant, in either space or time.

In Portuguese, it’s a bit more complicated. You must also take into account the proximity to the listener and whether it’s a recent or distant time (in the past or future). Don’t overwhelm yourself with memorizing all of these just yet. We’ll focus on one group at a time in the lessons to follow. The goal for now is to start familiarizing yourself with the parameters that affect which word is used.