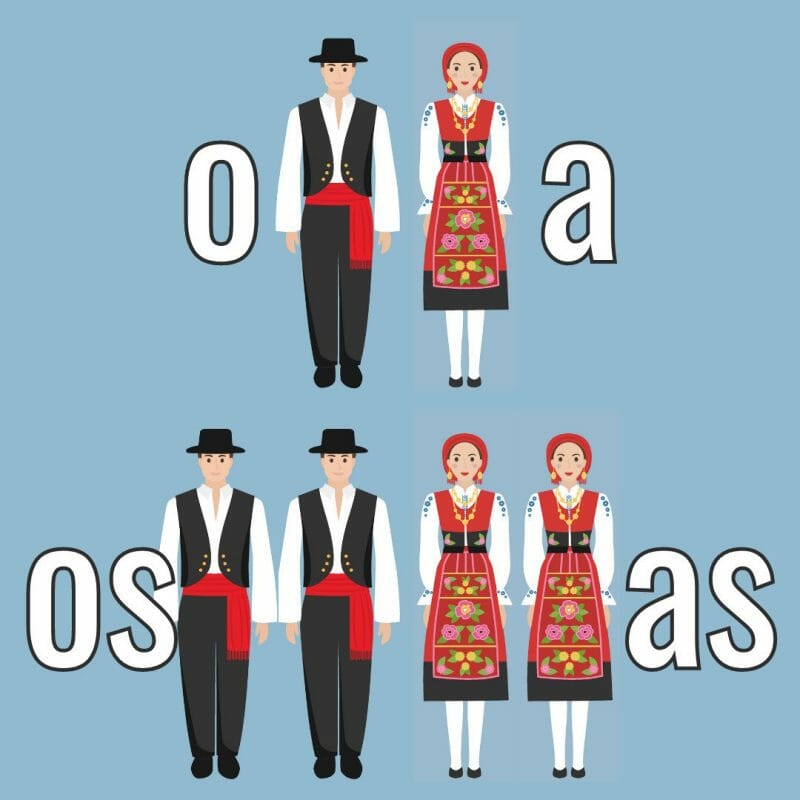 A substantivonoun Slow audio Play audio is basically a person, place, or thing. When we think of nouns, we tend to think of vocabulary words. But before we go adding a bunch of Portuguese words to your vocabulary, we have to get some really fun stuff out of the way first…

How to Say “The” in Portuguese

Here are some examples:

In Portuguese, almost every noun is considered either masculine or feminine. If you’ve never studied a Romance language before, this may seem strange at first. After all, in English we usually only assign gender to people or living things, right? Well, believe it or not, Old English used to use gender in a similar way, but it fell out of use over time!
Gendered words remain a fact of life for Portuguese speakers. But as a learner, how are you supposed to know whether a word is masculine or feminine, other than simply memorizing them all?
To get started, these guidelines will help some of the time:

But don’t get too comfortable… You’ll definitely come across words that break this rule, and many that end in a letter other than a or o.
a tribothe tribe Slow audio Play audio
a pontethe bridge Slow audio Play audio
As you may have noticed, all it takes to make a definite article plural is to add an s. This also applies to many nouns, such as mesas and carros above. Unfortunately, there are more complicated rules for making many other words plural, but we’ll worry about that later…

When to Use Definite Articles

Similar to how we use the in English, Portuguese definite articles often appear before a noun:
O homem lê o jornalThe man reads the newspaper Slow audio Play audio
But it doesn’t always map perfectly to English like this. There are also situations in which definite articles are used in Portuguese, but not in English, and vice versa. This may be confusing at first, but it will get easier after you’ve had more exposure to the language.
Here are a few examples of when to include a definite article in Portuguese:

When Not to Use Definite Articles

Here are a few common examples:

A Quick Note About Learning Vocabulary

When we introduce individual vocabulary words throughout the Units, Shorties, etc., we will usually include the definite article, as such:
a palavraword Slow audio Play audio
It’s more efficient to learn the gender at the same time you learn the noun. To avoid lots of unnecessary repetition in vocabulary lists, the English translation will usually not include the word “the”.