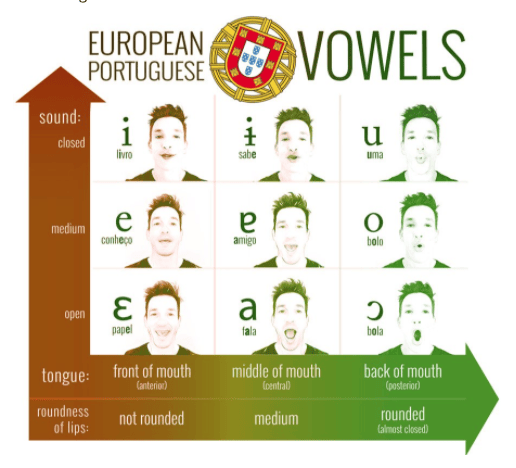 It’s time to take a deep dive into the pronunciation of vowels in European Portuguese! First we’ll invite you to play around with this interactive guide and then we’ll cover all the factors that go into creating the variety of subtle variations between each vowel sound.

Pronunciation of Vowels in European Portuguese

Explore the guide below to get to know Portuguese vowels a little bit better. You can mouseover Rui’s lovely face in the interactive diagram to listen to and practice all these vowel sounds! For the best possible experience, use a computer running the Chrome browser.

I Can’t Hear the Difference!

Hearing and producing the distinctions between each sound takes time and practice, so don’t worry about mastering all of these right away. We are primed to hear the distinctions between sounds in our native language(s), but the sounds of a new language will not come as naturally. This is because our brain keeps trying to match each sound to one that we already know!
It’s okay to start with what you know, which is why we included an English approximation for each Portuguese vowel sound. That way you have a more familiar example to get you started. As you progress in your learning, however, you’ll probably want to fine-tune your pronunciation. You don’t have to understand all this from the get-go, but familiarizing yourself with the concepts we use to talk about speech sounds can help you “open” your ears to more subtle differences over time.

So what exactly IS a vowel?

Play slow audio Play normal audio cake
Furthermore, notice how the a is pronounced differently when different accent marks are added:
a

Play slow audio Play normal audio there is
fã Play normal audio fan, enthusiast
Vowel sounds are produced by moving air through your mouth (and sometimes also your nose!) while modifying the air flow with your lips, tongue, and jaw position. Here are a few terms we sometimes use to talk about vowel sounds:

Now that we’ve had an overview, let’s get into the details!

Open (low) or closed (high)? The vertical position of the tongue indicates the openness or height of a vowel. With open vowels, the tongue is lower, i.e. more flat against the bottom of your mouth, creating less obstruction of air flow. In contrast, with closed vowels your tongue is higher in the mouth, essentially closing off some of the air flow and thus creating a different resonance.
The sounds along the bottom of the chart are more open and as you move to the top of the chart, they become more closed. When comparing European and Brazilian Portuguese, you may notice that European Portuguese tends to sound more closed.
Accents can also give you clues about the openness of a vowel. The ˆ accent denotes a closed vowel, while a ´accent denotes an open vowel. We can hear the distinction using minimal pairs like this one:
avô

Your lips affect the “roundness” of a vowel. They can form a circle, stay relaxed, or be spread to affect the resonance of the sound. Notice there is more rounding as you move from left to right in the chart.

The vowels we’ve discussed so far have been oral vowels because the air is directed through the mouth, but Portuguese also has nasal vowels that are produced when some of the air also travels through the nose. This is what distinguishes the oral vowel in the word mau

Play slow audio Play normal audio library
melancia Play normal audio watermelon
If you see an accent mark, however, this overrides the default rule, and the stress will be on the accented syllable instead:
gíria

This is what people are referring to when they say that European Portuguese speakers like to “eat” or “swallow” their vowels! Reduced vowels are basically vowels that are unstressed to the point that they are barely pronounced or even dropped entirely.
For example, the sounds for o and e are typically reduced in unstressed syllables at the end of a word. Listen to how the final o‘s and e‘s in ralado, isso, disse, etc. are pronounced in these sentences:
E eu ralado com isso

Now that we’ve explored some of these different factors, let’s take a look at some of the different vowel sounds associated with each written letter.
A: casa

The best way to get comfortable with pronunciation is to spend plenty of time listening to native speakers rather than trying to memorize every single rule. That said, we’ll cover a few more interesting patterns that you may notice along the way:

Can’t get enough of European Portuguese vowels? For a live demonstration and further explanation, check out our video: Open & Closed Vowels or practice / continue on with our unit on Minimal Pairs.