When you need to translate English to European Portuguese, or European Portuguese to English, it can be hard to find the right website. The majority of online resources draw from the Brazilian dialect. Consequently, while you can usually get a technically correct translation, it may not match the way Portuguese is spoken in Portugal.

We did some research and comparison to give you a quick overview of some of the best translation websites:

This one is our go-to for translating sentences from European Portuguese to English. In fact, it’s what powers the translator on our website. You can try it out here:

DeepL seems to be the best at accurately translating the nuances of the language, especially when it comes to expressions or colloquial language. It’s also associated with an app called Linguee. Linguee lets you search for Portuguese words to see how they are used in context within text from across the web.

The only downside to DeepL is that it (currently) doesn’t support as many languages as some of the other sites. The list of supported languages is growing rapidly, though. 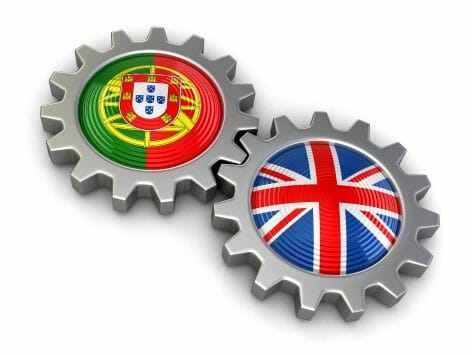 This site is useful for translating individual words, but you can’t use it for sentences. You can search from English and a few other languages. It returns the European Portuguese translation, as well as translations for phrases that include that word. The ability to see these related phrases makes it nice for exploring and expanding your vocabulary.

This site is helpful for translating individual words and short phrases or expressions. It shows you how a word/phrase is used and translated in context. The translations tend to lean more toward Brazilian Portuguese, however, there is also a dictionary section that provides European Portuguese audio when you click on the translation.

The Translator section includes European Portuguese audio and you can choose English to Brazilian or European Portuguese text. The translations tend to be more literal, though. That said, you can also use the dictionary section, which is similar to Reverso, as it shows you words and phrases in context. In addition, it includes “similar translations” to let you explore phrases containing the same word or words. This dictionary section of the site is sometimes helpful for looking up idioms or common phrases. The English translations generally lean more toward British English. 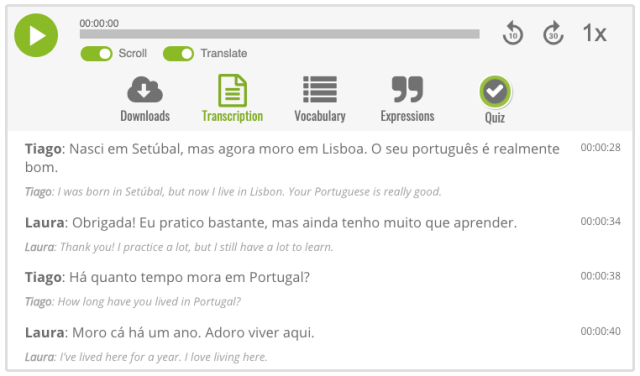 Remember that these translation services are very helpful tools, but not official translations. Since they are automatic, you can’t just click ‘translate English to European Portuguese’ and expect it to be accurate every time. Thus, you have to combine automatic translations with your “human” Portuguese skills to evaluate whether you’re truly expressing what you want to say.

As a Practice Portuguese member, you can listen to Shorties or Podcast episodes with synchronized European Portuguese transcripts, along with the English translation (as in the screenshot to the right). Each and every one of the hundreds of dialogues and articles are written and translated by humans. They are an excellent way to get more comfortable with Portuguese. Practicing with reliable translations helps you develop familiarity with the vocabulary, common expressions, grammar, and even slang, specific to the European Portuguese dialect.