To Kiss or Not to Kiss? 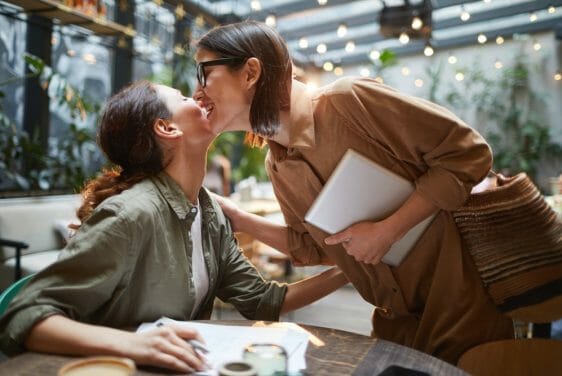 There’s more to Portuguese greetings than just what you say, so let’s talk about the cultural aspect as well, plus some other phrases that may come up during introductions. There is quite a bit of variability in appropriate greetings within different contexts, so you can’t rely on any strict rules, but we’ll cover some of the general expectations of kissing etiquette in Portugal. This is a very subtle aspect of communication that you’ll get more comfortable with over time.

In informal contexts, generally two kisses on the face are exchanged between a man and a woman or between two women. Meanwhile, men usually shake each other’s hands, which we call aperto de mão

Play slow audio Play normal audio Give me a handshake!,

When kissing, we always give our right cheek first and then the left. These so-called “kisses on the face” are often not actually on the face. Some people, usually women, bring their lips close to the face to kiss lightly, but most of the time, we just touch cheek to cheek and make the sound, kissing the air.

Some people choose to just give one kiss on the face instead of two. This is particularly true of people with a certain higher social and economic status.

Before or during any of these Portuguese greetings, what is said depends on the context and our level of intimacy with the other person. For example, friends and acquaintances can say a Tudo bem?

Play slow audio Play normal audio Everything's all right?, a question that is often more rhetorical, similar to how What’s up? or How’s it going? can be used in English.

Meeting for the First Time

In case you meet someone for the first time, you can choose to say Olá, sou o João, prazer

Greeting someone physically is widely used, but it’s optional, of course. With large groups, it might be preferable to just say boa tarde

Play slow audio Play normal audio So, everyone good? than spending a minute kissing and reaching out to everyone. It may also happen that we meet someone more shy and less comfortable with physical greetings. When in doubt, wait for the other person to move forward with the hand or take the first step.

Regarding greetings between family members, they vary a lot. For many families, they’re the same as those between friends, but with probably more hugs involved. For others, kissing is the chosen greeting between male family members instead of handshakes.

In a professional context, a handshake is the form of greeting used by both men and women. Among men, the handshake is always more firm than between a man and woman, and you can even expect a strong shake from someone more enthusiastic.

Now Ignore Everything We Said 😷

At the time of writing, because of the health measures imposed due to the novel coronavirus, nobody should be kissing or touching other people’s hands. For now, only verbal greetings will be used in order to follow “Pandemic Etiquette“. Once the pandemic ends, at least you’ll be aware of how Portuguese greetings work, and hopefully be able to put into effect what you’ve learned here.